Elmira, that little town sandwiched in the middle of route-17, may be known for Mark Twain’s corpse and civil war POW camps but now those two pieces of history have some competition with Hero Bot Con.

This show was my first as an invited guest and I could not have felt more honored. Envision one moderately sided Elks Lodge packed with over five hundred art enthusiasts discussing everything from elaborate mixed media work to photo realistic paintings. I was in heaven.

When you go to bigger conventions the main focus is on collectibles and consumerism. Everyone walks in with a list of signatures and items they want to collect, they shell out ungodly amounts of money, and then go on their merry way until the next show occurs and more money is spent. 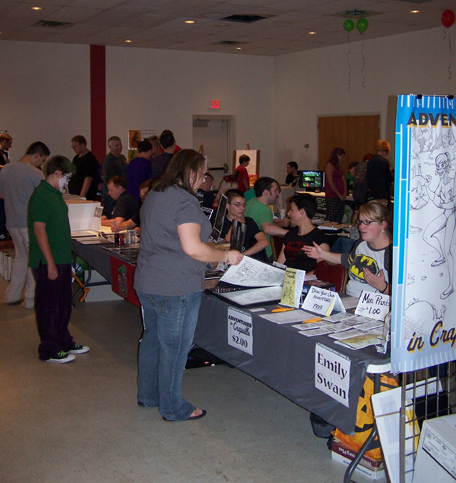 This show was considerably different. Rather than a room full of back issues and sketchy salesman the space was packed with enthusiastic comic book writers, artists, inkers, gamers, and fans. With only three merchandise vendors out of a potential fifty or so spaces (the remaining spots were all independent artists) this was something magnificent. To top it all off, rather than charging for entry the event was free with a food donation to the Elmira Food Bank. With about 580 visitors to the event they managed to raise over 1000 food items for the bank. The recent flooding and the up and coming winter it is guaranteed that these items will go to good use. 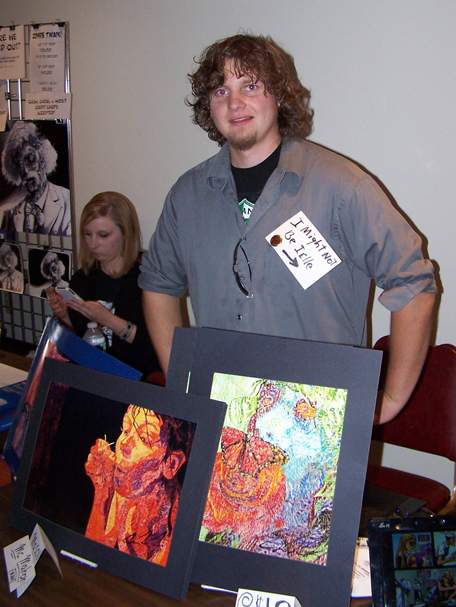 One of the artists I was lucky enough to meet was this fine gentleman, Mason (pictures above). He is a SUNY ESF grad who makes miraculous mixed media pieces with exacto knives and old newspapers. This work was fantastic. He cuts out specific colors from each paper then meticulously glues them together to make different images. I have never seen anything like it and one of his prints now sits on a wall in my office. 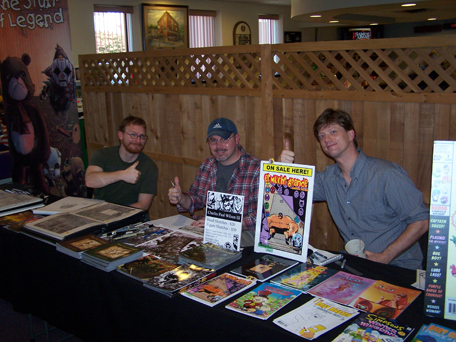 But, like anything, the rock stars have to come in and taint the place. Pictured above are Aaron Kuder (Artist on Key Of Z and Armory Wars), Charlie Paul Wilson III (Artist of The Stuff Of Legend and Superman), and Ken Wheaton (Typically a creepy old man but sometimes an inker for The Simpsons comics). I love picking on these guys for being the comic book big guns but they are some of the nicest people in the industry. Throughout the day they did sketches, talked about their experiences working professionally, and nerded out with fans. I’m constantly amazed at the work these three are able to accomplish. 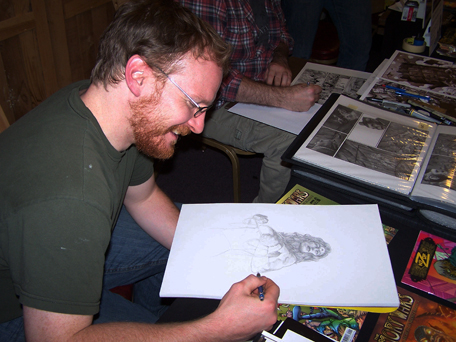 Aaron is fairly new to the field yet creates some work that I’ve seen comic book veterans fail to do. The wonder woman piece he was working on was created without any photo references. Watch out for all three of these guys. I’m willing to bet within the next few years they will all be making work that will leave you breathless.

Overall, the whole experience was amazing. With any luck this will turn into an annual event and I will be invited back. If you ever have the chance to attend, I highly suggest it. Perhaps you will even see me there and receive a long overdue high five for checking out my website.

For more information about the show you can read The Star Gazette’s piece about it here (there might even be a segment about an unconscious animator you might be familiar with).