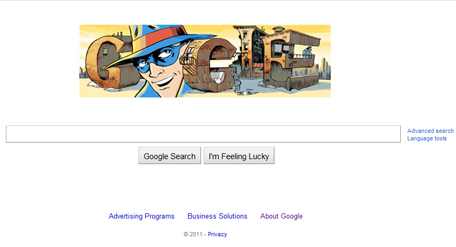 Like anyone else, I find myself fascinated with the content that takes priority on the Google front page on any given day. I may have even let my class have a Pacman free for all when google had a playable pacman game. Unfortunately, the majority of the “celebrations” that google takes part in don’t hold my interest for very long.

Today, though, I was very delighted to see that google (along with my buddy Scott McCloud) celebrated Will Eisner‘s 94th birthday today on their website. For those of you who are not familiar with Will Eisner he was a cartoonist who revolutionized the comics medium through his creations such as The Spirit, Comics and Sequential Art Textbooks, The Contract With God Trilogy, and a variety of other comics and graphic novels that gave critics a new respect for comic art.

In the 1940s he became one of the first cartoonists to own the rights to a character he created (in this case The Spirit). Previous to this point in comic history a cartoonist would create a character and the owner of the comic company would own the character and profit from it while the true creator would work for low wages on stories related to that character. The classic example of this is Jerry Siegel and Joe Shuster who created Superman and sold him to their boss for next to nothing and spent the rest of their lives trying to attain at least some of their rightly deserved money back. The way that Eisner treated his creations empowered cartoonists and showed them that receiving the proper royalties for their creations was possible.

Other than his alteration of the comic book business model he revolutionized the art of logo creation in the comic medium. Every story he created would incorporate the logo into the scenery of the story (a tenement building would spell out the words “The Spirit” or the title of a story). This practice made Will Eisner a comic master and his contributions are recognized year after year at the Eisner Awards which is the highest award a cartoonist can receive in the field.

If you’re interested in learning more about Will Eisner feel free and check out my previous posts about him here and here and or give yourself a present of Life, In Pictures which is a collection of autobiographical stories by Will.

Happy Birthday Will! I hope you’re creating some fantastic illustrations in cartoonist Heaven.