I’ve always had issues with addiction. Not in the traditional sense (I’m still straight edge at 24 and that isn’t changing anytime soon) but more so in regard to a need for knowledge. It’s typically not an intellectual craving that holds any true value to society. I will never do the type of research that will determine different ways to cure cancer and win the lottery simultaneously but I don’t have a problem reading seventeen different “academic” essays about the correlation between adolescent comic book readers and enhanced media literacy capabilities.

My most recent addiction has related to the writings and performances of Harlan Ellison. He has been writing professionally in a variety of forms from political essays to science fictions short stories since 1955 and is still going strong at the age of 76.

Other than being a great writer, Harlan Ellison also is quite the unique personality. Similar to some of my other favorite artists he is also a negative unpredictable cynical old man. Notorious for saying things and acting in ways that make others uncomfortable he truly is a character. He mailed a dead gopher to his publisher when he felt they were trying to screw him financially (this end in a $35,000 fumigation bill), he successfully sued James Cameron for stealing some of his ideas for the famous movie The Terminator, and managed to obtain pneumonia while writing his story Pretty Maggie Money eyes naked sitting next to an air conditioner.

Last night I watched a documentary about Harlan entitled Dreams With Sharp Teeth for a second time. After the film’s completion we watched the extra features in which the director filmed Harlan Ellison and Neil Gaiman (writer of Sandman, American Gods, and Coraline) eating pizza together. At one point Neil Gaiman discusses the smile that appears on his face whenever Harlan does something absurd and antisocial. At that point my buddy turned to me said “Ryan, you’re my Harlan Ellison.” It’s good to know I have the power to make people as comfortably uncomfortable as an angry 76 year old yiddish man from Ohio.

When I first started absorbing his material a few weeks ago I sat down on my couch and started unconsciously sketching with my Pilot V7 as I often do. After the picture was completed it seemed to have the same type of gritty feel that Harlan Ellison’s work gives me. 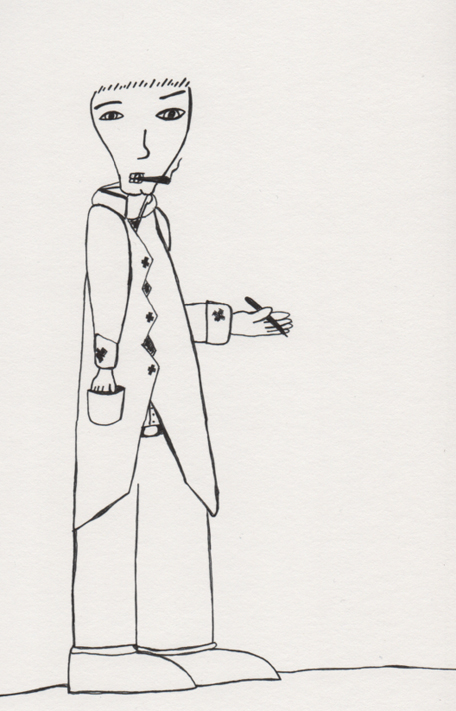 If you’re interested in reading or listening to anything by Harlan Ellison I highly suggest his stories I Have No Mouth But I Must Scream, The Discarded, Pretty Maggie Money Eyes, and The Prowler In The City At The Edge Of The World. You can find an assortment of his short story collections and books at your local book store.