Marathon was a hardcore band that played a ton around CNY in the early 2000s. I only caught them a few times but their catchy pop-hardcore riffs and poetic lyrics spun in my car CD player many a time. They disbanded in 2006 as members moved to all parts of the country and started other bands. This weekend they played for the first time in eight years which resulted in me driving to NYC and Rochester, NY to catch up with old friends, scream my lungs out, and have a blast.

The punk and hardcore community has the ability to teach people to examine their surroundings and find ways to utilize and improve them. This simple skill set results in a slew of punk and hardcore kids who transition from screamers and yellers to cafe owners, non-profit workers, fathers and mothers, etc. The older I get the more I see the transition of my peers and I could not be happier for them. They have changed neighborhoods, started initiatives for social change, and developed livelihoods that they never expected. The reverse side of the coin is that face to face time becomes limited. Seeing someone at a show is a rare occurrence and the main narrative of your life puts you in directions you never expected to face.

This weekend, though, gave me a chance to see people I hadn’t seen in years. Those community members that are doing such great things outside of the scene came out of the woodwork for the weekend. I reconnected with friends I hadn’t seen in 10 years. It was great to catch up and join together in the strange camaraderie that only a hardcore show can develop. By the end of the weekend my lungs were shot and my comprehension of sleep deprivation set it.

I traveled with a friend from Syracuse to Brooklyn then back to Syracuse on Friday. We slept a few hours then drove to Rochester where we had dinner with a cartoonist friends, Ken Wheaton of Popeye fame, and then settled at the show. I may have come close to falling asleep during the third band of the night, oops. 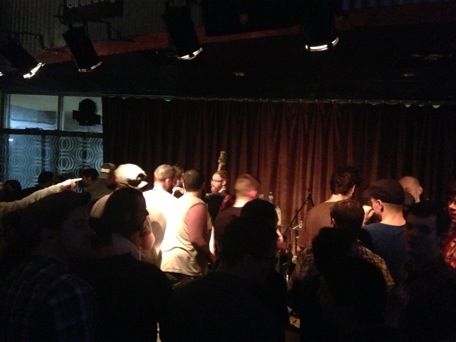 A friend was kind enough to let us stay at his house. We arrived there after the show and my energies were all over the place. It was this melancholy feeling as I became aware that I would not see these people again for quite sometime but I am so thankful to know them. I had trouble sleeping as I wanted to jump out of my skin, duplicate, and conquer all the tasks I daydream about. I wanted to edit my film, write a novel, draw a comic, start a band, learn piano, become fluent in another language, etc. all at once and even as I write this I feel closer to all of those things than I have in quite some time.

The next morning, groggy and weak, we went to The Pita Pit in Henrietta, NY for an early lunch. It was vegan friendly and delicious as always but this time it captured my heart. 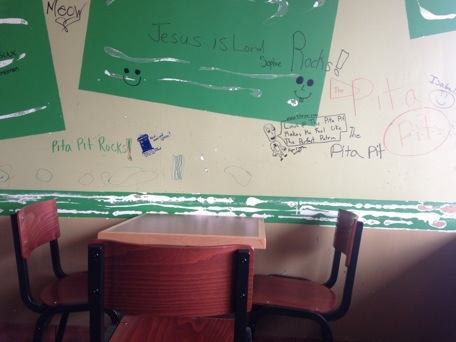 It seems to be construction season and the restaurant was in the midst of putting up a new wall. Markers lay around encouraging people to write a message on the “time capsule wall.” I couldn’t help myself. Drawing in public spaces is where I settle down and focus on my childish work. You will rarely find me at a restaurant where I haven’t defiled a placemat. I set to work and started to draw. First the eyes, nose, mouth, head, then neck, shirt, arms, shorts, shoes, and so on. It felt great to create. The first step of many to work creatively on a regular basis even if it is on a wall that will no longer be visible in the weeks to come. 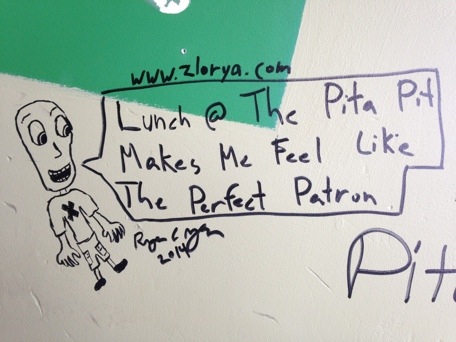