*Warning* If you have no idea what the term “Exquisite Corpse” means please click here to help better understand the information below.

A few months ago I posted an exquisite corpse created by four separate individuals while drinking vegan milkshakes at Strong Hearts Cafe in Syracuse, NY. Ever since that artistic creation came into being, a simple visit to Strong Hearts has motivated me to whip out my sketchbook and start doodling.

Yesterday my buddy Jomo (one of the masterminds behind the first Strong Hearts exquisite corpse) and I went to our favorite local vegan eatery and sat down for some vegan rubens and tofurkey sandwiches. While awaiting the arrival of our food I snagged two hardcore show fliers off of the counter, flipped them over, armed Jomo with a blank pen and myself with a red one, and we started another exquisite corpse project.

Traditionally, exquisite corpses were create by three separate individuals in a manner that prevents each creator from seeing the other creators’ work. Since there were only two of us we decided to play an exquisite corpse game in which we had to exchange drawings every 30 seconds. This prevented us from being able to complete the image that we were working on and allowed the other person to add extra elements that the other had not anticipated.

As per usual, Jomo was quicker, more inventive, and blew my additions away but they still came out pretty nifty. 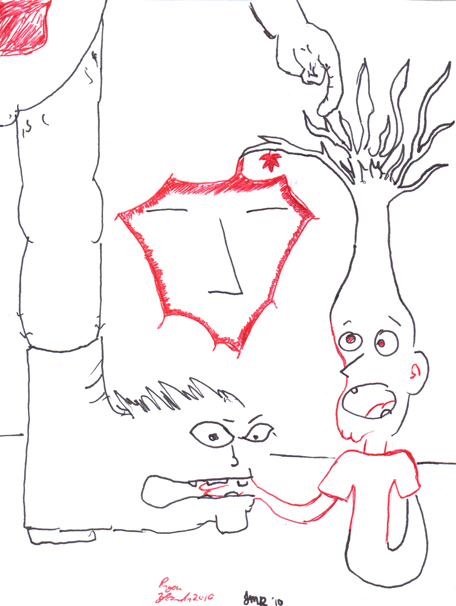 I strongly encourage artists of all varieties to play exquisite corpse games with their peers. The intention is not to overpower one another but rather to push your creativity to the limit. Think about it as artistic trench warfare with pens and pencils rather than machines guns and pointy hats.