Cartooning has always interested me for multiple reasons. I think the primary intrigues lies in a person’s ability to create a world that I am incapable of visiting but will always want to. I would love to sit down and have lunch with Charlie Brown while Schroeder entertains us with his piano playing or travel back in time to Craig Thompson’s memories of high school, love, and losing religion as he illustrated in Blankets. These different universes are not just intriguing because they house personalities that I adore, but because they have a visual appeal that can’t be met in our three-dimensional world. The two-dimensional page leaves much more to the imagination than the desensitizes three-dimensional world we experience everyday.

Adding to my curiosity about how these cartoonists’ creations is the way in which the worlds transfer from the creator’s head, to his/her hand, to the page, to the printing press, and lastly to the reprinted page someone on the opposite end of the world can hold in his or her hands. This journey consists of so many steps that I am only able to grasp small amounts of each one. The last part of the process is the aspect I would like to discuss tonight/this morning (depending on your perspective, of course).

A cartoonist typically pencils out their comic, then inks it, erases the original pencil marks after the ink dries, and sends it to the printer where the image is converted from a gray scale image to a blank and white one for more crisp lines when the page falls into my hands. There are many variations to these steps (see the work of David Mack or Eric Powell and it will change your life) but traditionally this is how Beetle Baily transitioned from Mort Walker’s head to the Sunday page of the Post-Standard Newspaper.

Since I started my ink illustrations a few years ago I have fiddled with the transition from gray scale images to black and white ready for print ones. For whatever reason, my heart has fallen for the more raw of the two.

Below is a small sketch that I drew a few months ago and was planning to use on a new set of promotional bookmarks. The actual size of the original illustrated image is probably smaller than the size you will be viewing on your computer. If you focus on the character’s mouth you can see the inconsistency in the ink’s color and the way in which a traditionally black area becomes splotchy. Lines doesn’t seem very smooth, often times seeming as those the character is covered in fur. 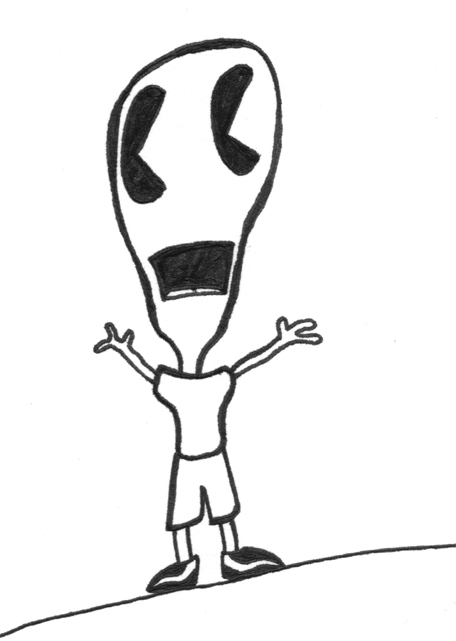 The next image is the same picture after being converted for black and white printing. The character separates more from the background and appears more apt to actually being crying out rather than existing with his mouth left open. The main flaw is that the edges of the image (where my inking inconsistencies happen) are much more jarring though keep in mind that when this image is printed it will be shrunken down considerably rather than blown up as it is on your computer. A traditional comic book page is drawn on an 11 inches X 17 inches Bristol board but is later printed at 6 5/8 inches X 10 1/4 inches. This makes the furriness that is left appear minimal to the reader who has attained the final edited and printed copy. 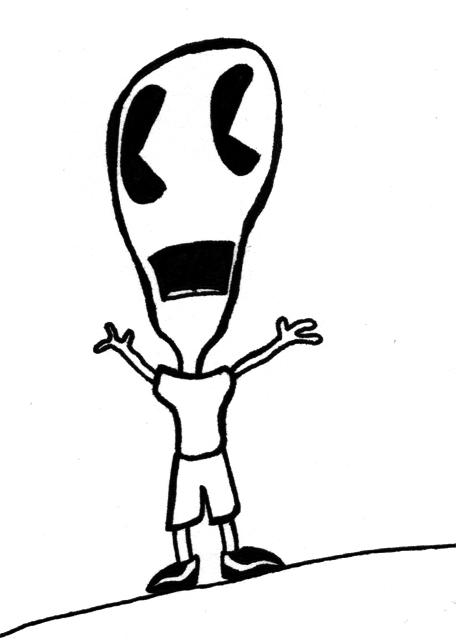 Despite the glaring issue that the image needs to be shrunken down to a size that is smaller than the original image in order to attain its most “traditional” look, I still cherish my original inconsistent image the most.

My ability to create universes and characters that come back again and again to entice the reader lacks in existence. Rather, I like to think my strength is to create images that describe different aspects about me through the inconsistencies and brutal honesty of the image. These images aren’t intended to be downsized and printed so that someone can critique them. They are created to explore who I am, and what better way to do that then showing you an image that is as close to the original flawed image as possible? Maybe someday I will reach a point where a little deception is needed but at this point in time I’m learning at a far faster rate through detecting and embracing my errors.