As tends to be my routine of late, I would like to apologize for the duration it has been since my last correspondence. Between teaching, music composition, homemaking, and adult normalcy I have not been able to update on much. But alas, I truly appreciate your continued interest in my media work and hope this update will satisfy you…for a little while.

Over the last few weeks I have been spending some time re-acclimating with an old friend. His name is Animation and I am proud to say that we re-connected as though no time had passed. My student are the cause of this much needed reunion and I could not be more thankful for their efforts to keep me on my toes. I began teaching a semester-long Traditional Animation course in late January at the Manlius Pebble Hill School. We have been studying Winsor McCay, Walt Disney, and the Fleischer Brothers which has been an absolute blast. Nothing makes my heart flutter more than elaborate conversations about the self-awareness of the animated frame. Students are in mid-transition from slide to cel animations and it has been important to me that I devote spaces to practice the craft of animation inside and outside of the academic environment. Thus, I dedicated the month of March to creating a series of animation stands. 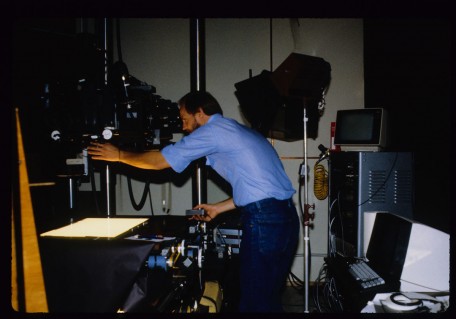 Similar to optical printing technology, animation stands are intended to give the filmmaker as much control over the image as is humanly (and technically) possible. These contraptions secure a camera so it aims straight down toward a table to ensure that every frame is matched to the millimeter. Adjustable lights are mounted to the side of each stability bar to maintain consistent exposure and a defined workspace grid is mapped. Long story short, successful animated films live by the Mise-en-scène filmic philosophy (every frame holds significance to the overall piece) and animation stands help guarantee that level of control.

Traditional animation studios creating cartoons utilize animation stands at the end of their working process. They tend follow a specific sequence of storyboarding, designing prelims, illustrating backgrounds and characters, creating cels, and then, finally, bring everything together to the animation stand to film one frame at a time. 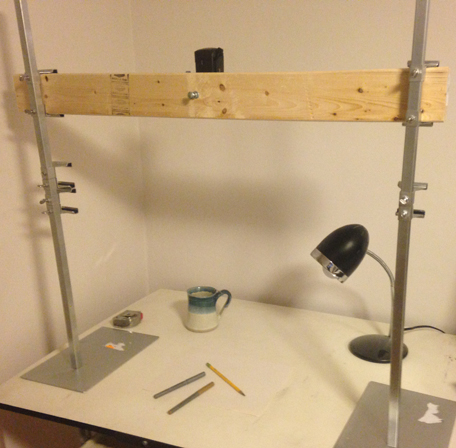 My students and I have some different requirements than big studios (buying a $3,000 set up didn’t seem conducive to my back account) so I began the hunt for materials. After harassing the kind clerks at Home Depot and interrogating every person I knew who could weld I determined that melding square pipe together may take me some time to design in in affordable manner. PVC pipe was also an option but it’s flexible nature does not lead to the most stable of working stations. Just when I thought I would have to go back to shop class I stumbled into a Macy’s that was going out of business. Right next to the beheaded manikins they were selling adjustable sale sign displays. Each stand is comprised of a sturdy platforms, a square rod about 3-feet tall, and two sets of adjustable clamps. As they seemed sturdy enough to hold a camera and lights I bought all I could awkwardly carry through the mall and made one last trip to hardware store to pick the remaining supplies. Two hours later there was something that resembled an animation stand sitting on my drafting table.

I still need to pick up some uniform lights, obtain a camera with manual functionality and live feed outputs, settle on an animation software (my preferred software, Animation DV Simple+, became outdated a decade ago), and find the time to animate. I was delighted that this evening was wide-open so I put together this intervalometer test (you may know the term better as “time-lapse” functionality).

My students begin to produce cel animations in the coming weeks so I look forward to that process of animation. I promise, there are more cartoons to come.

Lastly, in moderately relevant news, I have received a lot of questions about my documentary Through The Eyes Of Cabin “Ehh.“ I’m happy to say that I will be spending a week in the editing room in early April but there are hundred of hours of work to be done including the preliminary edit, master edit, and sound edit which will be overseen by my friend Josh Sicard. I expect the film will take another year to reach completion but it will be worth the wait. As I hope this documentary will shed light on the important work that the Camp Good Days And Special Times organization is doing it is very important to me that the product is polished. I appreciate everyone’s patience over the last gazillion years. I’ll make it up to my CGD friends. Pinky promise.

It’s now time to get back to daydreaming. Thanks for the read.