My sophomore year of college I took an American Detective Literature And Film class to cover my pluralism requirement. Though I was excited that this covered my required history credit, I was ecstatic when I started reading and analyzing detective and crime fiction from the 1930s to the 1950s. I was instantly hooked and have since tried to read every piece of pulp fiction I can get my hands on. Books by Dashiell Hammett, Raymond Chandler, Ross Macdonald, Evan Hunter (aka Ed McBain), and Patricia Highsmith glare up at me from the floor where they are stacked 50 high since I ran out of shelf space.

Each writer explores issues like suicide, justified homicide, homosexuality, unwarranted societal pressures, promiscuity, and many others which were considered taboo for the time. These craftsmen and craftswomen pushed the enveloped and developed fantastic methods of storytelling that have influenced many modern writers (I know Bruce Coville is a big fan of Dashiell Hammett’s The Maltese Falcon while Stephen King makes multiple references to the works of Raymond Chandler throughout his bibliography).

As you can probably tell, I love talking about this type of literature as much as I enjoy reading it. A few months ago I was waiting in line for a signature by comic book artist Frank Quitely at a convention. I started to talk with two guys from Providence, RI who were in line with me and pulp fiction came up. We talked about our favorite authors and they suggested I check out crime writer Jim Thompson. When these guys told me that Thompson’s work was heavily influenced by crime schemes he learned as a young bellboy at a Hotel in Texas I was writing down his titles for my next trip to the bookstore.

I picked up The Killer Inside Me which is considered his finest and most “mature” work. The book follows Lou Ford, a small town sheriff who is constantly fighting his urges to act violently. Thompson treats violence like a strange disease that can only be overcome psychologically. Lou Ford is constantly abusing his power to perpetuate these acts of violence which gives the book a nice raw edge to it. The reader is always curious how he is going to cover up his “work” and plan for his next act of aggression. 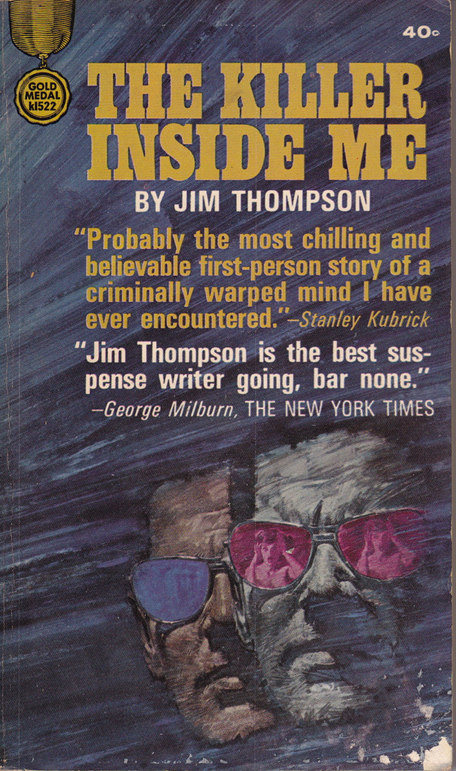 On top of exploring the nature of violence and aggression as they relate to power and privilege the book also provides some nice social commentary. Thompson’s perception of the world he lives in is dark and hopeless. Even the individuals in power feel the hand of fate coming down on them.

In one classic scene, Lou Ford is talking with a kid who is going to get pinned down for a murder that was actually committed by Lou himself. Through the protagonist’s diaglogue this piece of literary genius is produced:

“How can a man really ever know anything? We’re living in a funny world, kid, a peculiar civilization. The police are playing crooks in it, and the crooks are doing police duty. The politicians are preachers, and the preachers are politicians. The tax collectors collect taxes for themselves. The Bad People want us to have more dough, and the Good People are fighting to keep it from us. It’s not good for us, know what I mean? If we all had what we wanted to eat, we’d crap too much. We’d have inflation in the toilet paper industry. That’s the way I understand it. That’s about the size of some of the arguments I’ve heard.”

Just in those few words a reader can hear the hopeless tone in his voice, the comprehension that the system is working against him, and the justification for his actions to offset the issues the system sets up for him. The glass is half empty and I wouldn’t have it any other way. Not to mention he incorporates some element of humor to cope with the real issues at hand. This is what I adore about this period in literature. It was ahead of its time and still, to this day, it speaks some form of the truth.